Click the Link above for my first ever Vlog. Please be sure to submit your questions and suggested topics on my AskVix Page and check back frequently for my responses. I look forward to many Vlogs to come. Hugs 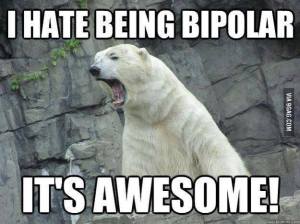 The life we live as family and friends of those with mental illness is a daily roller-coaster ride.  One moment things are calm and seemingly good, the next moment you are on a downward spiral chaos. You learn over the years what the triggers are and how to minimize them at all cost. That is not always possible. The Bipolar Mind for example is constantly evolving.  My son was diagnosed at age 6 and we had him on various cocktails of medications to stabilize him but that was never perfect.  The problem with the medications is that they are not themselves. Sometimes the cocktail creates a shell of the person you know. I honestly don’t know what the right plan is for this illness but there truly has got to be a balance.  I want my creative, highly intelligent son, not the over-medicated zombie he is on medication but I also struggle with watching him ride this roller-coaster of emotions, lies and fantasy.  He lives in a world in his head that is not easily explained to those who have never experienced it first hand.

As a parent you want life to be easy for your children and for them to have anything they put their mind to. We tell them that if they want something in life they just have to set goals and shoot for the stars.  The problem with a mental illness is that the mind doesn’t know limits and when they can’t achieve what they strive for immediately they get overwhelmed and then spiral.  To the outsider they can seem so normal and well adjusted when in actuality they are battling their own thoughts constantly.  Living a positive life helps but it is not the complete answer.  I sit by and watch and hope that one day a cure for this disorder will be found.  The fear of self-medication with drugs and alcohol is a fear I live daily.  I have the thought that I will get that terrible phone call one day that something horrible has happened.

Threats of suicide, irrational rages, lies and over-exaggerated thoughts.  One minute loving life and the next thinking everything sucks and everyone is out to get them.  How do we know what is real and fantasy if they don’t even really know themselves?  Do we just walk away and let them fight this battle alone or do we allow them to run our lives with their lies and passive aggressive comments that leave you feeling you aren’t doing something right?

When you love a person with mental illness you have to accept them as they are and guide them to fight daily but not to use their illness as crutch and to never become the victim of it.  We all have our battles to fight, it is up to us whether we continue to fight or just give in to the battle and lay down and let it defeat us.  I will never stop fighting but I will also never allow this battle to take over my life.

My son was diagnosed with Bipolar Disorder when he was 6 1/2 years old.  Prior to his diagnosis he had difficulty socializing in school and would have rages that I never saw at home.  He was always a perfectionist and a pleaser.  If he felt he was doing everything you wanted and was to his expectations he never had any problems.  It was when he felt he displeased or didn’t meet someone else’s expectations that he would self implode and end up exploding.

There were many times I received calls from the school because he had lost control in the classroom.  They finally did psychological tests and found that he was highly intelligent and actually capable of working 2-3 years ahead but because of the rages he got to the point that he was one episode away from being expelled from school in the 1st grade.  It did not make sense to me.  They tried to tell me, “There’s nothing wrong with him. He’s just smart.”  I responded, “A smart child does not pick up a chair and throw it across the room for answering a hypothetical question incorrectly.” The school Psychologist responded, “There is no right answer to a hypothetical question though.” I looked right at her and said, “Exactly my point.”  If he did not get the acknowledgement to his answer to a question the teacher had directly asked him, and they just moved on to the next student he would assume that his answer what “wrong”.  If the teacher took the time to just respond and say something like, “Thank you for that answer.” or just took a few seconds to acknowledge the response, he knew he was heard.

Once I knew what it was that my son was dealing with, I educated myself on the topic the best I could and worked closely with doctors, administrators, other parents, and teachers to ensure that my son received the education he deserved. While at the same time, I educate others on what these children require to be successful in addition to the medication they may need. The best explanation I can give is if a classroom was on the second floor and a student was in a wheelchair we would need to make sure they had a lift of sorts to get to class.  A special needs child of any level has their needed “lifts” that may be acquired or supplied to make them successful.  We need to put together a “tool box” for them so they have what they need to succeed in life after school as well.

After 10 years of working with the schools and medical professionals I am happy to say that my son is currently managing his disorder naturally with no medications.  He definitely has his tough days but we have given him the “tools” he needed to tackle those days head on.  He will always have his struggles unfortunately, but now I am very confident that he will be able to analyze the issue and be able to handle it properly. These children just need our support and guidance.  Not all children will be able to do it without medication but with the right guidance you won’t need to over medicate them.